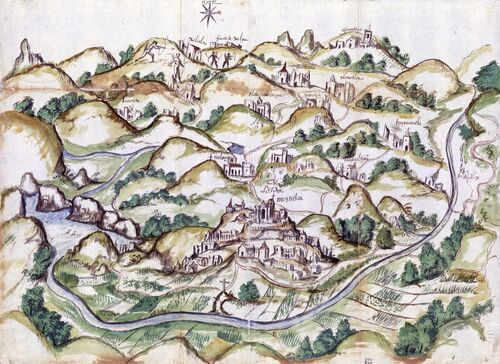 I learned about the European conquest of the Americas the same way most children in the U.S. do: as a series of portentous discoveries followed by total obliteration. I slowly came to understand this history as tautological; the stories of modernization and cultural erasure are the same. The Eurocentric telling of these tales renders the colonizers heroic. Whatever the outcome: they were intrepid and brave; and, they were successful in destroying most everything. 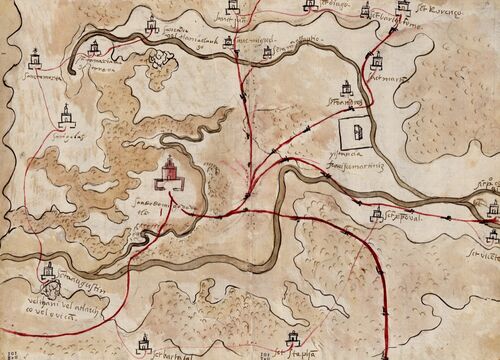 In August 1519, Spanish explorer Hernando Cortés marched inland into Mexican territory, beginning a long period of European colonization of the region. Indigenous communities didn’t succumb to the invaders, nor did they disappear. They contended with them. The period of colonization that followed Cortés’s conquest was complex. Indigenous communities were living among the Spanish—not in perfect harmony, but still very much living—negotiating for the maintenance of their own languages, land, and hierarchies.

Over the summer, the Blanton Museum of Art at the University of Texas at Austin challenged the idea that Indigenous cultures were completely destroyed. “Mapping Memory: Space and History in 16th-century Mexico,” which featured 19 hand-painted maps created by indigenous artists known as the Mapas de las Relaciones Geográficas, showcased the cultural hybridization that formed during this period. For contemporary context, paintings by Mariana Castillo Deball were also on view. Named after cities in Mexico, many of her pieces—abstract, map-like traces of dots in pastel or deep shades—seemed to mirror the maps’ landscapes. 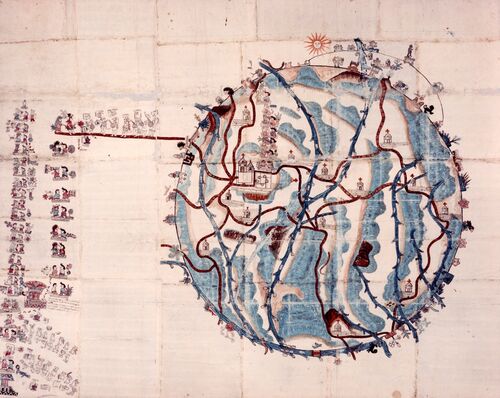 Curator Rosario I. Granados is part of a group of scholars and historians complicating “the vision of the forsaken,” she explained. Granados wants to refine and specify definitions of indigenous to pinpoint specific communities, like the Aztecs, the Otomi, and the Zapotecs, without lumping them into one victimized category. “The maps,” she said, “allowed for those kinds of conversations.”

The original maps were a response to a questionnaire sent to the Americas by the Spanish Crown in 1577 regarding the demographics and terrain of their colonized territories. Most maps came from the south and center of Mexico, “where the tradition of map-making was already very active,” Granados said. Many of them “were made by elites. If you were a noble person or highly educated, you knew how to draw and paint.”They showcase “some of the visual strategies used by native communities for the endurance and perseverance of their cultures throughout the so-called colonial period and well beyond,” the exhibition catalog notes. 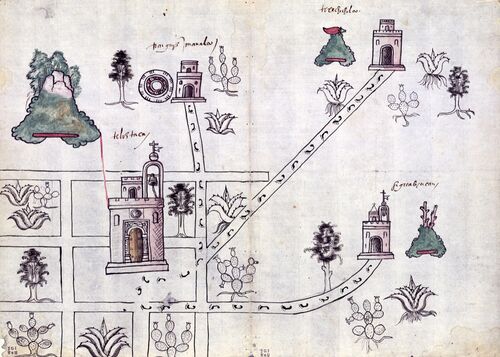 In one 1581 map by an unknown artist, titled Tetliztaca, Mexico, Spanish spaces of power—Catholic churches, depicted by cross-topped facades—are surrounded by local flora, like cacti and succulents. Footpaths lead to symbols taken from indigenous art and vocabularies, indicating those communities’ centers of power. Another map, Teozacoalco, Mexico (1580), is circular, with red and blue pathways forming a veined nucleus. There are churches, rivers, pyramids, and what appear to be Mixtec ideograms: trees, snakes, mountains, bodies. The circle shape is purposeful, Granados explained. Indigenous mapmakers “knew how important it was for others to be aware of the boundaries of the community.” 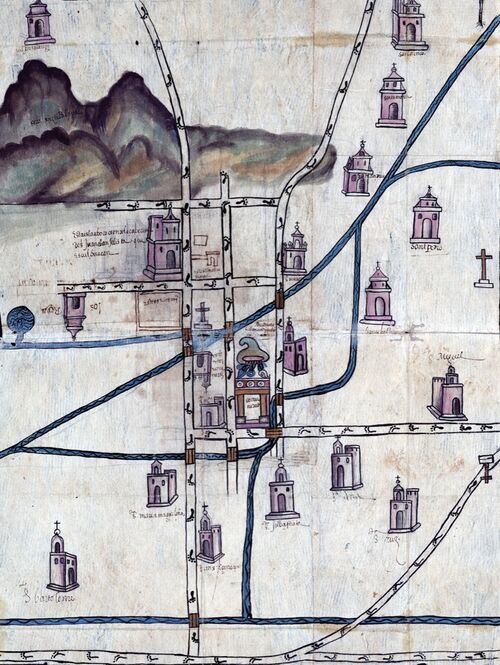 In the late 1500s, decades after Spain’s initial conquest, Mexico entered a period that scholar María Alba Pastor calls Social Recomposition. After the first encounter with the colonizers, “it was not clear what kind of government was going to be established,” Granados said. Several generations later, a distinct “colonial society was starting to emerge,” she explained. “The maps clearly point to the presence of all the groups involved. They were a way for indigenous peoples to say, ‘This is our community. This is who we are.’” As writer and scholar Alex Hidalgo told Artsy, “even after their initial commission, these maps continued to inform land disputes in the region for one or two hundred years.”

Toward the end of the 16th century, dynamics in the Spanish colonial government shifted. “Indigenous communities lost some of the privileges they’d had for a couple of decades,” explained Granados. “I’m not going to say the indigenous people were always granted a voice or that the Spanish didn’t kill a lot of people. That would be irresponsible. There was a lot of racism, but it was possible for them to negotiate, to some extent, their cultural position.” 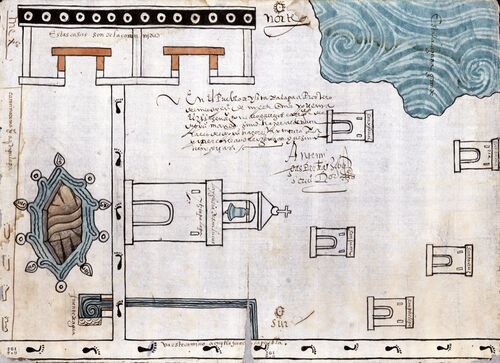 Attributed to Martín Cano, Ixtapalapa, Mexico, 1580. Courtesy of the Blanton Museum of Art.

In Ixtapalapa, Mexico (1580), a map attributed to Martín Cano, churches are abundant, but different sections of the massive topography include indigenous community houses, undulating water, and other stratified symbology. The work is a visual precursor to modern Mexican culture: “Indigenous culture and Mestiza culture is everywhere in Latin America,” Granados said. “You see the indigenous influence as present as the Spanish.” Granados, who is Mestiza and has Otomi and Spanish grandparents, was pleased to see the 19 maps displayed together for the first time and to discuss Mestizaje (of mixed race and culture) with Mexican-American students. “They know what it’s like to be of two worlds,” she said. Granados refers to the Spanish conquest “as the deepest wound in Latin American history—an open wound. What is it to be Latin American? What is our true identity?” she asked. “I think we might need to accept that we are both. We are hybrid.”

15+ Creative Online Classes to Spark Your Imagination This Week